Here are the ten rules to adhere to when wanting to become a member of the underground police:

Yes, it's time for a new series of blog shenanigans. Call it the WPH version of DJ's complaining, where we will speak our mind, complain, nag, slag off, etc. But where we also hope that some of you reading this will learn a thing or two in the process.

Actual situation: in recent weeks I had been booked to play on a festival, and that festival had chosen not to pay Sabam (the Belgian mechanicals society, like GEMA in Germany, BUMA/STEMRA in The Netherlands, BMI/ASCAP in the US, ...) by telling Sabam that no music would be played on the festival that Sabam has any claims to. A standard trick and one that is very much correct when for example young bands that are not a member of Sabam play their own music, but a trick that is not really correct when you have dozens of DJ's all playing music by different people. Any number of tracks is bound to be registered with either Sabam or any of its foreign counterparts. (which is the same, because all these organizations have contracts with each other, so if your music is registered in Germany with GEMA, you SHOULD get paid for it when it's played in Belgium) Can I blame the festival for trying not to pay 'silly money'? Not really, but the fact of the matter is that IF Sabam would treat their business correctly - meaning using correct playlists to divide the money received - then that money would not be silly, it would go to the people who actually made the music that's being played. A fact that not many promoters and clubs realise, but sadly enough a fact that Sabam does not really promote, because now the money they receive is divided yearly according to playlists received by mainstream radio stations and a small percentage of party playlists sent in by promoters who receive a playlist request from Sabam. Something that happens SO rarely that it can never even half-correct reflect what is actually being played.

Still with me? Okay, the story continues. That festival received a phone call from Sabam saying that they should pay the full fee, because there is a DJ on the line-up that is registered with Sabam, a.k.a. me, Red D. The festival people panic, call me and explain the situation and ask if this is true that I'm registered with Sabam. I explain that I am registered with Sabam, but as an author of music, NOT as a DJ. Which actually means that as long as I play only music that is not registered with Sabam, Sabam has got f*ck all to claim in my name. But of course I play my own music, so in that respect Sabam was correct. But are they now interested in giving me the money that I should get for playing my own music? Not in the least, they only used my name in order to make a claim for money that will go in the big jar to be distributed among the mainstream acts that feature on the mainstream radio playlists. I know countless Belgian pop artists that had even minor mainstream hits in recent years and still get decent money from Sabam years later. That, ladies and gentlemen is money that belongs to smaller artists and producers, people who's music is being played hundreds and sometimes thousands of times by DJ's on small parties, internet radios, etc. If they would be interested in a correct division of the money, they would already have explained all of the above to the festival, and also have stressed the importance of playlists.

So where does that leave me and countless other producers/musicians? Well, double-penetrated in best porn tradition (no rubber in sight), because in the first place parties and festivals try to not pay Sabam (which, again, I can understand because they are not properly informed why they should pay and how their money will be treated), and secondly Sabam uses my name to collect money of which I will never see a penny. The only thing I can do as a DJ is fill out playlists myself of the music I play, and send that in. Which you can do as a DJ, and which I have been doing for about one year and a half, but which has not really seen any spectacular rise in the money I get from Sabam.

I want to stress that in defense of Sabam I do understand that it is near impossible to get a completely accurate view on all music being played, but right now all Sabam does is in the interest of mainstream acts. No effort is being made to actually make clubs and promoters aware that they can send in playlists to make sure that their money goes to the people that they book. And up till now I see no effort being made to use current technology like Shazam to simply register what is being played in clubs and on festivals to get closer to a correct overview. It shouldn't be that hard, they are already using that system in The Netherlands, in association with BUMA/STEMRA. That's right, Sabam and promoters should work together in order to give artists what they deserve, and not fight each other. If I as an artist would get a proper and deserved fee from Sabam when my music is doing good, then I for one would be happy to go and play for less money. Seems like a nice win-win to me isn't it?

Am I thinking this will cause a revolution? A march to the Sabam offices? Not at all, but just share this as much as possible to make people aware of how things actually work. And if you are a producer/label/party that has more questions about all this, just contact me via the contact form on this site. I will try and give you the information you need, based on everything I have experienced and learned over the years. I don't know everything, but I do know a thing or two about this :-)

It's been a while since we've mentioned something that does not belong in a dj booth. But lately dj booths are starting to resemble technology shops, which is all good if you actually really do something with it, but really, a dj controller to sync your tracks? Maybe it's time some people out there start to face some facts...

Let's be honest, you are a DJ. Which means you simply play other people's music in a specific order. You spend time searching for music and you select what to play at what time? True, but that's something anybody who likes music also does. So the only thing that sets a DJ apart from somebody who just collects and plays music is mixing. And possibly also fashion and the number of DD-cupped blondes by his side, but that's a different story.

One would expect that seeing as you sync your tracks, you would have the best selection in the world, because you can devote all your time to that part of the job. But hang on, you usually just play the Beatport or Traxsource top 10 of  *insert any boring genre here* , so you're not really doing that either are you? You have time to put some nice effects on the tracks? Well, by the music you play I can imagine that that might  be necessary to keep things vaguely interesting, I grant you that. But hey, maybe you should concentrate on finding music that's simply good by itself and doesn't need effects?

Mixing, taste and attitude, those are the things that can set you apart as a DJ. The first one can be tought to any monkey with a sense of rhythm, the second one is a matter of opening up your ears and thinking beyond the usual and the latter one comes with the second one. What is failhouse? Easy, it's everything we consider to be not done, funny, blatantly foolish and simply not 'house'. Curious? So are we actually... 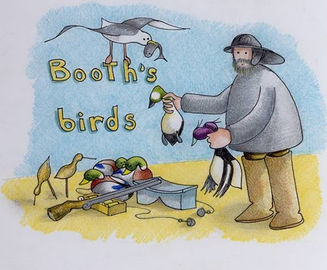 We all know them, the enthusiastic ladies that want a piece of the action, looking for attention and the better part of the DJ's drinks cabinet...

Although a widespread phenomenon in DJ booths around the world, the booth bird is hard to find on the internet, and so the picture I found may yet provide you with a bit of a false idea...